Throw Down The Gauntlet A.K.A Krav Maga Testing

This test was filled with amazing people who gave 100% effort. I can’t say it enough we have an amazing community here at RMSDF.  Both the Castle Rock and Meridian Village / Lone Tree locations tested their Krav Maga skills from White Belt going for Yellow all the way up to Brown Belt going for Red Belt. Every belt group exceeded my expectations!

This Krav Maga belt test came just 2 days after my 16 year anniversary of teaching Krav Maga. It started back on Nantucket Island Ma. with my gym Krav Maga Nantucket. Still going, by the way, https://www.facebook.com/krav.nantucket under the ownership of Steve Tornovish. Now going strong 12 years in Castle Rock Co. It is such an honor to be able to teach Krav Maga to the people of Douglas County, Colorado.

Our goal of making everyone who comes and trains with us at RMSDF “Safer & Stronger” through Krav Maga & Fitness has never been stronger. We made some big changes to the belt levels in the last few years. We have introduced the Peace Warrior Project and it’s rotating curriculum. Throughout this my upper belts have been amazingly supportive of my mission. I can not thank them enough for standing behind me.

The White Belt group in an amazing job. I was blown away by the progress you all have made it such a short time training your self defense skills. I hope to see you all at the next testing going hard for your Orange Belts. Beat the odds. Small goals = Big Goals. 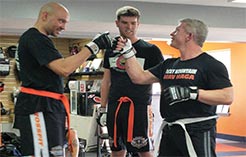 My Orange Belt group have been dedicated to their training now for 6-9 month on average and really showed what the Peaceful Warrior Project is all about. They have such a wide range of skills in Krav Maga, I think they might be the most prepared Orange Belts we have produced at RMSDF. It is also great to see an even split between the Castle Rock and Lone Tree, Colorado locations.

Camo & Green Belts were pushed hard today. They respond with some excellent technique, I couldn’t be more, please! It is so great to see the skill someone can

gain in self defense when they train hard 2 -3 days a week in a practical system like Krav Maga. I would put these guys up against any traditional martial arts black belt. We have a lot of students say this level of testing in Krav was as hard or harder than their Black Belt in another martial art. I know I felt the same way.

This group is just simply solid. They all train hard weekly, more importantly, they have now trained for years. It shows not a single one of them is unwilling to stand in and fight. There is some real talent in this group and as I told them the lowest fighter is still in fighting hard against younger and more talented fighters. Let this be said they had 5 members of the RMSDF Instructor team going through the test as well. Not one of them backed down, true warrior spirit! Everyone in this group will be making the Black Belt in the near future. they just need more time on the mat.